Posted on September 4, 2008 by Charles Lambert 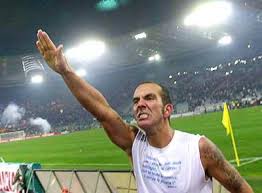 You may have noticed the conspicuous absence of football from this blog. One of the funniest, and most shocking, moments at the start of each new academic year is the one in which I’m outed by students as someone who honestly couldn’t give a shit about the sport. Not one shit. Well over 60% of Italians, regardless of age and sex, are overwhelmingly interested, on the other hand, and generally find it far easier to accept me as an atheist (which is actually no worse than being protestant) than as someone whose indifference to calcio is infinite.

Having said that, I’m very interested indeed in football as a phenomenon (and, I admit, I’m often fairly interested in footballers as, well, fit young men in shorts). And so I’ve been fascinated by the political hoop-jumping occasioned by last weekend’s episodes of violence as Naples fans trashed trains on their way to Rome to ‘support’ their team. It came as no surprise to discover that among the ‘fans’ to be arrested for vandalism and worse, far worse, were more than 800 convicted criminals, which, in Naples, means the Camorra. Add to these the numerous apologists of fascism, the most common gesture in the stadium being a raised arm, and it’s a wonder Italy hasn’t invented its own word for hooligan, instead of using ours.
It’s a truism that politics and football are intertwined in Italy. It can’t be any other way when the prime minister is also the owner of the country’s biggest teams, routinely wheeled out at election times as though the entire team were not only his employees but testimonials to his political wisdom. It would be easier for a politican in Italy to express indifference to football than it would for an American candidate for president to announce that s/he was agnostic, or didn’t believe in free trade except when it took American jobs. In fact, the line between religion and football is pretty permeable. Maradona, before becoming a pro-Castro, coke-snorting porkie, was up there with Padre Pio on the wall of every pizzeria between Formia and Salerno.
Why am I writing about this now? In response to the news that ex-Lazio player Paolo Di Canio wants to manage West Ham. Di Canio made a name for himself on the pitch not only as a footballer but as one of the most rabid supporters of Mussolini in a world where fascism is the norm. That’s him in the picture, displaying his armpit. Just what West Ham needs.
And yes, I do remember where I was when England won the World Cup in whenever it was.1964?  Bored stupid in the back of the car as we drove home from a family holiday in Ventnor.

This entry was posted in berlusconi, fascism, sport. Bookmark the permalink.