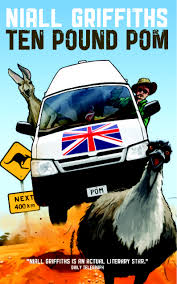 One of my father’s brothers lived in Perth. He came back to the UK when I was a child, with his Australian-born wife, to visit. He was a brash, arrogant man who thought that the Lambert family – or his branch of it -had invented God and still held the patent. He bullied his wife, an overweight placid woman called Sylvia, and tried to bully my mother, without success. She told him she had a mind of her own, a concept so novel he was briefly speechless. He had a curious accent, half-Lancashire, half-Aussie, and used it to criticise the old country whenever he got the chance. He was the worst kind of convert, in other words, and he didn’t do very much for the image of his new home as he stalked around the old one, picking fault. He certainly didn’t encourage affection towards the Antipodes in me. He was particularly scathing, I remember, about my brand new identity bracelet, de rigueur for thirteen-year-old boys at the time (in my eyes) but a sign, to him, of deeply suspicious sexual ambiguity; a moment of rare intuition. He’d moved to Australia just after the war, as far as I know -anyone who might know better is dead – and I wonder if he was among the first to take advantage of the assisted passage scheme that started in 1945 and ended in the 1970s.

Among those who did take advantage of the scheme were the parents of author Niall Griffiths, and his book Ten Pound Pom, is an account of the three years he spent as a boy in Australia, interleaved with his experience of the country now, revisiting the scenes of his childhood thirty years later as he retraces the trip his family made from Brisbane to Perth. The first thing to say about the book is that it’s emphatically not a celebration of the country. Brisbane, where he started – and starts – his journey, is particularly roughly handled, and his dislike – most clearly stated in the following judgement on p. 42 – This is a shite place. I can’t wait to leave it – is more than substantiated by his description of the place and its people. Perth fares a little better, but not by much. He’s a vivid and passionate writer, and the picture he gives is rich with detail and as generous with its affection towards what’s good as it is with his fury towards what isn’t. The language is endlessly inventive. Here’s his description of a mad Big Issue seller:

She’s got eyes like fruit-machine reels about to pay out and a laugh like a stack of saucepans falling onto a hard lino floor.

But it’s not just pyrotechnics. There’s a lot of hard thinking – and feeling – going on as Griffiths the man moves through a world that’s both alien and familiar, surprised that so little has changed and shocked, not always positively, by what change there is. The constant shifts from present to past, from opinionated (in the best sense) travel journal to the unsentimental, and unsentimentalised, trawling of memory through association, makes the book not only a portrait of a place, but of a way of seeing place, idiosyncratic, responsive to the point of being raw-skinned, endlessly alert to what matters. It’s a lovely book – honest and humane – and it confirms my impression of Griffiths as a writer whose work is absolutely worth seeking out. Just read his piece on dignity and self-worth (p. 126) if you don’t believe me.

If I have a bone to pick with this book, and I do, it’s not with its author, who has done a grand job, but with whoever was responsible for proof-reading it (i.e. its publisher). If a book’s worth putting out – and this one emphatically is – then it’s worth paying attention to presentation. I’m not talking MasterChef here, just making sure the food is on the plate. There’s barely a page in the book that doesn’t have at least one error of punctuation or formatting or spelling. Some of them are irritating – the confusion between ‘it’s’ and ‘its’ (and no, I’m not being anal). Others are more disconcerting: when Griffiths recalls the first girl he ever kissed, ‘a Scottish girl his age called Jackie Thompson’, we find this:

I had my first proper kiss here. On that balcony, there. With Jackie Thompson. Wonder what he’s doing now.

Shades of identity bracelets? No, just shoddy editing. In a book that’s rightly scathing about a badly proof-read information leaflet, errors like ‘hereded’ for ‘herded’ and ‘Iisland’ for ‘Island’ (three times on the same page!) and ‘thoise’ for ‘those’ (I could go on) could profitably have been avoided.

This entry was posted in review and tagged niall griffiths. Bookmark the permalink.