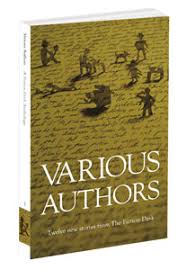 I first came across The Fiction Desk when I found a thoughtful and generous review there of my first novel , Little Monsters. Soon after, I discovered that the man behind the desk, Rob Redman, was operating from Rome, where I’ve been living and working for almost thirty years. We met up for lunch in a very pleasant restaurant in Garbatella, ostensibly so that I could be interviewed – my first face-to-face interview, as it happened. I was nervous, excited, wondering how well I’d acquit myself. I practised the kind of answers I’d give to the questions I thought I might be asked (something I’ve been doing since I imagined myself on the Eamonn Andrews Show at a worryingly early age). At the same time, I thought, what could be easier than to have the chance – and implicit obligation – to do nothing but talk about myself as I ate and drank at someone else’s expense. But my natural – let’s say, to dignify things a little, novelist’s – curiosity overwhelmed the original function of the occasion and I came away knowing an awful lot more about Rob than he knew about me, other than that I liked seafood, white wine and poking my nose into my interviewer’s business. We had a second attempt shortly after that in Via Ostiense, in a tavola calda beneath where I teach, a windowless place with a mirror ball and dark blue walls that transforms itself by night into a club. I behaved myself better, Rob asked his questions and I found the experience gratifying and challenging in equal measure – a sign that Rob knew just what he was doing. You can read the result here.

Among the facts I discovered about Rob was that he intended to move into publishing. So I wasn’t surprised when I heard about his plans to produce a quarterly anthology of short fiction. The UK doesn’t really have a decent short story quarterly; those publications that do exist often feel too small-pressy, for economic reasons, or self-serving, for editorial ones. Granta, as far as I know, hasn’t published an unsolicited or un-agented piece of modern fiction for years. Rob’s plan was to produce something that looked, felt and read like a real book. Something that readers would be proud to own and writers proud to appear in. On the strength of the first number, Various Authors, he’s done just that.

It’s not my job, as one of the contributors, to review the book, although I’d certainly find much to commend there if I did, not least the extraordinary range of styles and approaches, reflecting Rob’s openness and sound editorial judgement. (I will say that I was moved to tears, laughter and admiration on several occasions.) I’m sure these qualities will be confirmed by the second volume, due out in summer 2011 and entitled All These Little Worlds. So if you care about short fiction and its continued appearance in the UK, do yourself a favour and pick up a subscription.