HG Wells, The Door in the Wall, and MR James, Canon Alberic’s Scrap-Book

These days, I tend to organise books alphabetically and by genre, which probably makes me sound more anal than I really am (most other things I just throw on the floor). But when I was a youngish teenager, I loved the kind of look you see in the house style mags, with books arranged by size and colour. Some publishers were decent enough to collaborate with me on this. Two of my favourites were Picador, with their fabulous white spines producing a nicely understated block of elegance on my shelves, and Penguin, whose books in those days – I’m talking late 60s, early 70s here – were about as rigid in their colour scheme as the original Model Ts. Orange for general fiction, blue for non-fiction (but they were Pelicans, so didn’t really count) and grey for modern classics. I don’t know what year the original style – graphic with horizontal bands of colour and white on matt card – was replaced by a more contemporary (and now, inevitably, more dated) photographic style, but I had examples of both in my collection, rigorously divided for purely aesthetic reasons into two separate groups. Among my favourite modern classics were the Evelyn Waugh novels in the first style, with drawings by David Gentleman*. 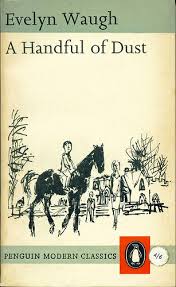 Everything I read by authors like EM Forster, Evelyn Waugh, Aldous Huxley, Virginia Woolf, Henry James and a host of others, I read in editions that looked like this, the beautiful balance of grey and white, the elegant typeface called Joanna and the work of Eric Gill, before his toppling, later replaced by Helvetica. The Modern Classics had pretty much cornered the market in what felt like the great modernist tradition of English fiction; and not only English, I’m sure I read André Gide in these editions, and Thomas Mann. I used to wonder what it took to be seen as a Modern Classic. DH Lawrence wasn’t necessarily (but Isherwood usually was and so, inexplicably, was Galsworthy). William Golding yes, George Orwell no. Stevie Smith no, Carson McCullers yes. Some interesting editorial choices were clearly being made.

And that’s still the case with the very stylish grey-and-white new series of Penguin Mini Modern Classics, brought out to celebrate the 50th anniversary of the original selection. Waugh isn’t there, and neither is Huxley, but Henry James and Virginia Woolf have both made it through, along with a number of writers whose reputations have been made, or re-evaluated, since 1961. The two books I’ll be taking a look at are both very much on the outer edges of modernism, and I’m not sure that either of them appeared in the original series. (I do have a well-thumbed copy of MR James’ Ghost Stories of an Antiquary in Penguin, but it’s bog-standard orange). I suspect they’d both have been seen as rather old-fashioned 50 years ago, perhaps more so than they do now.

Both groups of stories were written and published around the end of the nineteenth or early twentieth century, and their authors were near contemporaries, although Wells lived ten years longer than James, only dying in 1946. The stories are interesting for what they have in common and for what distinguishes them from each other. The Wells mini classic contains three stories, all quite different. The first, The Door in the Wall, is a neatly written, rather touching parable about the conflict between worldly aspiration, and another less tangible life in which such aspiration counts for nothing, a life that exists beyond the wall. The story ends ambiguously, with the reader left in two minds as to whether the protagonist finally passes through the door into the mysterious garden behind it, although it’s clear that Wells recognises the fascination exerted by the sense of potential elsewhere the door represents, and is on the side of the imagination. The only problem is that the garden feels as though it’s been imagined by someone who’s spent too much time in the land of faery invented by Edward Burne-Jones. There’s a pre-Raphaelite decorative tweeness about the description of the place that reduces the overall power of the story.

The second in the group, The Sea Raiders, is much more effective. Essentially, it’s a monster story, with vile creatures dragging themselves up from the deep to… well, you can guess the rest. It has all the pseudo-scientific trappings we’ve come to expect from the genre, which may be old hat now, but certainly wasn’t at the time. And it does have some particularly effective touches: the point at which the creatures make ‘a soft purring sound to each other’ I found surprisingly chilling, in the way that much of MR James is, and for similar reasons. The notion of ‘marvelling at the shrillness and variety’ of a man’s voice as he’s devoured is also likely to remain with me for a while.

The final tale, The Moth, reminded me of Ian McEwan’s Amsterdam, if only because it deals with bitter rivalry and revenge. It’s a cautionary tale, and great fun to read, and once again it plays with the science/supernatural interface, possibly to the detriment of the former, which seems to offer little more than a petard by which its practitioners can most easily hoist themselves. Like the other two stories in the book, the world its protagonists inhabit is middle-class, political or academic, and essentially male, and this is one of the aspects they share with the MR James collection. They’re also, like James’ stories, extremely readable.

As a group, the MR James volume shows more coherence than The Door in the Wall, if only because two of the stories share their protagonist. Dennistoun (as in ‘Let us call him Dennistoun’) is the archetypal James hero, a Cambridge fellow with an interest in antiquarian objects and ecclesiastical history. In both of the stories that feature him, the action revolves around an image; in the first, a ‘sepia drawing … representing, one would say at first sight, a Biblical scene’, but that, on closer inspection, reveals the presence of a ‘being that crouched’; in the second, the mezzotint of the title is the bearer of horror, with its image of a creature whose lower jaw was ‘shallow, like a beast’s…’ When people talk about James, they tend to emphasise the weirdly disturbing ordinariness of his horror, the twisted sheet in Oh Whistle, and I’ll Come to You, My Lad, for example, but these two could have walked, or crawled, straight out of a Stephen King novel. The piebald long boy in Lisey’s Story comes from the same dark place. What makes them so creepy, because they are creepy, is the conviction that, as someone says in Canon Alberic’s Scrap-Book, they are ‘drawn from the life.’ How this is done within the story isn’t explained, but the understated authority of the narrating voice, the dry and dusty precision of it, acts as a constant guarantee.

The other two stories in this small book operate in a more typically (MR) Jamesian way. In The Rose Garden the shock is not in what’s seen, but in its incongruity, and the same is true of the final tale, The Stalls of Barchester Cathedral, where the vividly imagined but entirely unreal creatures of the first two stories are replaced by nothing more sinister than wood that feels like wet linen and a cat where it shouldn’t be. James is at his best when he uses the technique Isherwood attributed to EM Forster: ‘The whole of Forster’s technique is based on the tea-table: instead of trying to screw all his scenes up to the highest possible pitch, he tones them down…’ My favourite James story, one that isn’t in this collection, is called The Treasure of Abbot Thomas; it contains what is for me the most effective example of this technique. Here it is:

Well, I felt to the right, and my fingers touched something curved, that felt–yes–more or less like leather; dampish it was, and evidently part of a heavy, full thing. There was nothing, I must say, to alarm one. I grew bolder, and putting both hands in as well as I could, I pulled it to me, and it came. It was heavy, but moved more easily than I had expected. As I pulled it towards the entrance, my left elbow knocked over and extinguished the candle. I got the thing fairly in front of the mouth and began drawing it out. Just then Brown gave a sharp ejaculation and ran quickly up the steps with the lantern. He will tell you why in a moment. Startled as I was, I looked round after him, and saw him stand for a minute at the top and then walk away a few yards. Then I heard him call softly, “All right, sir,” and went on pulling out the great bag, in complete darkness. It hung for an instant on the edge of the hole, then slipped forward on to my chest, and put its arms round my neck.

I mentioned King earlier and he’s a writer who’s learnt a great deal from James, as have most modern writers of horror from Lovecraft to Adam Nevill; one of the things they’ve learnt is that people don’t always deserve what they get. In two of these four tales, the horror simply happens. Even in the other two, the moral comeuppance feels arbitrary and wilful, and anything but theologically sound. Which makes MR James a more disturbing, and subversive, writer than he might at first appear.

*This should be Quentin Blake, of course (see below), but I’ll leave the link. I like David Gentleman.

This entry was posted in review, Uncategorized and tagged hg wells; mr james. Bookmark the permalink.

7 Responses to HG Wells, The Door in the Wall, and MR James, Canon Alberic’s Scrap-Book