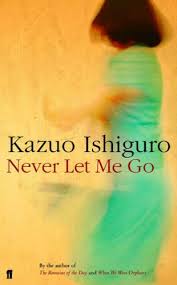 It seems a bit churlish to follow my last, fairly negative review with another one – although Ishiguro‘s work generally and this novel in particular have been sufficiently praised by enough people for one small dissenting voice not to matter that much – but I found Never Let Me Go frustrating on a number of counts, some technical, if you like, and some not. Technically, I was struck over and over again by the sheer dullness of the language. Much has been said about the masterful way Ishiguro deploys a limited vocabulary and stylistic range to reflect the damaged nature of his narrator, but it seems to me that, once again – because this is a feature of much of his writing – the author has tried to make a virtue out of the endemic flatness of his prose. If this were the case in one novel, or even two, it might be easier to attribute to authorial intention. And it’s certainly true that, in the three novels of his that I’ve read, the narrator is someone whose personality is damaged in some way. But it seems to be true of all his work, which makes me suspect that the clichéd blandness and boneless, repetitive syntax are pretty much all that Ishiguro does. Emotionally scarred narrators are no excuse: there must be – damn it, there are! – numerous ways of writing about, and out of, damage without using language that operates at the level of a rather dispirited Christmas round robin, as it does in this book.

The second source of technical frustration is Ishiguro’s use of a sort of cataphoric narrative device to move the story on, with the narrator saying something like ‘that time with the tree, doll, tape, etc.’ and then telling us what happened that time with the tree, doll, tape, ad infinitum. Used sparingly this technique can be very effective. In this novel, it’s practically the only method the author uses to advance the tale, and it gets particularly irritating well before the end, as well as failing in its purpose, which is surely to encourage the reader to find out just what did happen next. Too much ellipsis produces, in this reader at least, a sort of curiosity fatigue, as well as feeling, well, clumsy.

My final quibble, and it’s a big one, has to do with the general air of resignation that hangs over the book and others by Ishiguro. He’s best at loss, captured in a forlorn, stiff upper lip sort of way, ideally in a grey, rainy landscape that saps any energy the characters (or reader) might have. His books are contrived to ensure that the prevailing mood is a low-level whinge, what my mother used to call grizzling, whatever the subject. Nuclear attack, WW2, class warfare (and the lack of it), cloning for spare part surgery; no matter how appalling the central issue of the book may be, the only mood possible seems to be one of tearful, perhaps rueful acceptance. I know that literature isn’t supposed to be a weapon for change (although I’d like to thank it could be, used properly), but the refusal of the novel and its characters to even consider the possibility of resistance becomes as implausible, to me, as the passivity of the butler in The Remains of the Day. I can’t help but feel that Ishiguro actually values these qualities as having a sort of moral stature simply because they persist, and allow the status quo to persist. He strikes me as a deeply reactionary writer, and I find this uncongenial.

This entry was posted in review, Uncategorized and tagged kazuo ishiguro. Bookmark the permalink.