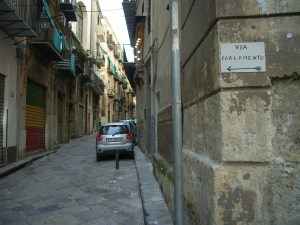 I took this photograph on the day it was announced that the leader of the regional parliament of Sicily was being investigated for Mafia connections. He isn’t the first: his baby-faced predecessor was famously photographed offering his partners in crime a trayful of cannoli – a local delicacy – to celebrate his conviction for a similar crime a couple of years ago. This street looks sufficiently nondescript to house the gang of self-interested delinquents that currently run the island (“by special statute”), but the real parliament sits, from Monday to Thursday each week, in a wonderful structure, shared with an Arab tower and a room of extraordinary beauty known, like a child’s nursery, as ‘Roger’s Room’, some distance from here. You’d think from the hand-written nature of this street sign that someone is making an ironic comment on the absence, or shabbiness, of the Sicilian parliament, or a suggestion that the damn thing simply go away. But this really is the name of the street, although I’ve no idea why. In a city where signposts are lamentably few, this small square of cardboard is probably no more than a private gesture of good will.

This entry was posted in corruption, government, mafia, palermo. Bookmark the permalink.