Decades ago now, I read a short story set in the future, when time travel was so common people chose eras rather than places for their holidays: Tudor Britain rather than the Maldives. The hero, for reasons I don’t remember, decided to visit Judaea in the days leading up to the crucifixion of Christ. Naturally, the holidaymakers had to be prepared to play their part in whichever event they chose to visit, to blend in, and the hero, with the rest of his group, was dressed and coached appropriately, instructed in what to do and say. The tour organizers took them through the main scenes: Gethsemane, the Passover with Pontius Pilate addressing the crowd and asking them whether they wanted him to pardon Jesus or Barabbas, the stations of the cross, and so on. When the group was ready, the holiday began. Everything went as expected. Before long they were gathered in the square beneath the governor’s palace and Pontius Pilate was talking to them, in Latin, with the two men – Jesus and Barabbas – standing by his side. The hero didn’t understand what Pilate said, but he waited for his cue to shout Barabbas. Free Barabbas. It wasn’t until he began to shout that he looked around and saw that everyone shouting Barabbas had come with him, from the future, and that all around the square, pushed to the edge, their voices drowned out by the tourists, were the actual inhabitants of the place, who were shouting Jesus. Free Jesus.

This story came back to me a few days ago when I was in Madrid. It’s a shallow comparison, I know, but I was standing in Puerta del Sol, at the heart of the city, and enjoying that feeling of being both part of, and isolated from, a place, a feeling that’s probably the essence of being a tourist. And then it dawned on me that all the voices I could hear around me, in what should have been a ferment of movida madrilena, a ferment I’d travelled over eight hundred miles to experience, were Italian. I might as well have been in Piazza Navona. We went to eat in a place called La Taurina, surrounded by the severed heads of bulls and matadors’ capes, framed like fans, and every table was occupied by Italians, calling for paella and sangria and for Barabbas to be freed.I looked round, wondering where the real Madrilenos were hiding, waiting for the moment to reclaim their city. 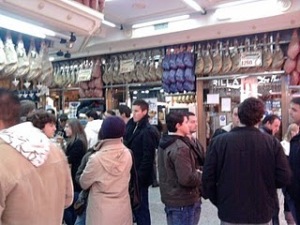 Fortunately, I didn’t have to wait long. They were packed like bocquerones (anchovies – don’t worry, I’m just showing off) in the Museo del Jamon just round the corner, queueing in deceptively ordered fashion for rolls of exquisitely scented cured ham and something to wash them down with. The floor was covered with crumpled paper napkins, crumbs, the occasional abandoned glass; the noise around us was exclusively, exhilaratingly, intimidatingly Spanish. It felt like the real thing, which, of course, is what we were after, however much our presence contaminated it. Even the prices were foreign, as if we’d also time-travelled to an age in which a glass of decent wine and a ham roll could be had for a couple of euros.

This entry was posted in holiday, spain. Bookmark the permalink.