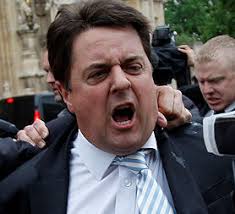 A very brief addendum to yesterday’s addendum (I hope you’re keeping up). I’m sorry to see that 8 million people ignored my advice and watched Nick Griffin on Question Time. Spineless as ever, I also watched an excerpt, but on the Guardian website so it may not count, given that the Guardian, like London, has been ethnically cleansed by decades of liberal readers. I wasn’t impressed. Now I see that Griffin and his chums are complaining (in what Jan Moir would no doubt call an ‘orchestrated campaign’) that the programme wasn’t ‘fair’. Like most playground bullies, Griffin was the first to run to teacher complaining that the odds were against him, which usually means they were not actually in his favour. But the best bit was when he used the classic ‘My Dad’s better than your Dad’ defence with Jack Straw. Griffin père apparently fought in WW2 (no, on our side) while Straw’s father was a conscientious objector. Was this relevant? Not at all, unless you’re a hate-mongering pseudo-patriot (so, in this case, yes). I’m surprised he didn’t rub a bit of dirt on his knee and say he’d been pushed into the fence by Bonnie Greer.

This entry was posted in fascism, television. Bookmark the permalink.