Posted on September 24, 2009 by Charles Lambert 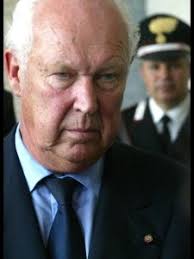 I wrote a short post almost two years about Italy’s ex-Royals, Vittorio Emanuele di Savoia and his appalling family, when the whole ungrateful gang decided to sue the Italian state to the tune of €260 million (plus interest) for the ‘moral suffering’ of being obliged to live in Switzerland for 54 years. You can read it here. They withdrew their claim some months later, presumably when it was pointed out that silence is often the better part of maintaining some small scrap of dignity, despite one’s best efforts to piss it away. Soon after that, the remnants of the Christian Democrat party decided to candidate the son, Emanuele Filiberto (hereinafter Fibbie), for a seat in parliament. There was an exhilarating moment during a press conference in which the party leader was caught whispering answers to a sadly confused Fibbie, who clearly hadn’t expected the press to be so insolent. Earlier this year, with his budding political career already in shreds, Fibbie won Italy’s version of Dancing with the Stars, a victory that strained the definition of both ‘dancing’ and ‘stars’ but let’s not be churlish; at least the boy knows how to wear a tux. Next stop, Fop Idol.

Now Pops is back in the news. He’s about to be tried for having attempted to corrupt a public official in a case that involves prostitution, gambling, drugs and the sexual abuse of minors. Sordid stuff and, as Dorothy Parker once said about girls attending the Yale prom, I wouldn’t be a bit surprised. According to a Milanese pimp who’d provided the man with an evening’s entertainment, the would-be heir to the defunct Italian throne complained that €200 for the young lady’s ‘performance’ was ‘excessive’. I’d need considerably more than that to share a hotel foyer with Vittorio Emanuele, let alone perform in a bed, but a chacun son gout. Still, it’s been a good cull this week for jowly old roués, with Briatore chucked out of Formula One. They say there’s never two without three, so who’ll be the third? I wonder. With the latest news about very large sums of money being extracted from the Italian tax system by a mysterious Dottore, the head of a certain media empire, maybe it would be wiser if Silvio Berlusconi stayed in the States.