Posted on September 23, 2009 by Charles Lambert

Productive dialogue is relatively easy among equals, perhaps because it’s supported by a kind of openness that occurs when no one feels under threat and when the basic aim of the dialogue – greater understanding, a solution amenable to all – is shared. It can still be adversarial; productive dialogue isn’t bland, but challenging. It challenges the listener to do at least half of the work, and often more; it recognises that speech that isn’t attended to, and elaborated in silence, might as well not be spoken.

But when people feel that equality isn’t there as a condition of dialogue, its nature changes. The lesser partners in the dialogue feels that insufficient attention is being given to them and their words. There’s a sense of exclusion and people who feel excluded no longer trust the value of what they say. They start to shout, and interrupt, gesticulate. They become ill-mannered in order to attract the other’s attention, while the other takes for granted that whatever he or she says will not be challenged, and begins to dictate. The dialogue is no longer collaborative, or even adversarial, but belligerent and oppressive. We see this happening all the time in the political arena. The people who feel powerless turn up the volume, and the volume of invective. They start to call their opponents Nazis, or faggots, or the Antichrist. The louder the noise gets the less those in power make the effort to listen. This is a paradigm of unequal dialogue.
OK, lecture over. Because what interests me is that, right now, the situation in Italy has reversed this paradigm. Berlusconi has an absolute majority in both houses of parliament, almost total control over national television, the most important means of communication, etc. yet he’s behaving like a teabagger on the White House lawn. His language is consistently that of the underdog, rendered hysterical through deprivation. His opponents are, variously, communist, subversive, most recently farabutti (common crooks). This isn’t the language of a man in power. This is the language of the dispossessed and the desperate.
He isn’t the only one to indulge in this sort of degraded rhetoric. Renato Brunetta, minister for public administration (see picture), started his spell in office by accusing state employees of sleeping on the job, calling them fannulloni (layabouts). (I’ll be looking at Mr Brunetta’s lack- 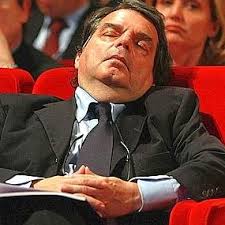 lustre performance as consulente and university professor in a later post. For now, let’s just say he has much to be modest about.) A few days ago, he decided to go one better than the boss and announced that the opposition in Italy was under the hegemony of an elite di merda (which needs no translation), an elite that deserved to morire ammazzato (to be murdered).
Perhaps the sort of bullying populism that SB and his government have ridden to power on makes such language necessary. In the meantime, the opposition, to whom nobody listens, measures every word.

This entry was posted in berlusconi, democracy, italy, language. Bookmark the permalink.

2 Responses to Mind your language