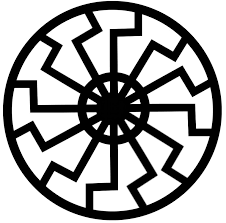 A new ‘security’ law, which only looks like a knee-jerk reaction, is about to be passed here in Italy. Like most laws of this type, it protects – or is intended to appear to protect – the law-abiding citizen from the other, almost certainly not a citizen, who presumably ought to be abiding elsewhere, obedient to some other less-civilised legislation. One of the nastiest of the many nasty provisions in the new decree is that it allows citizens to gang up, don uniforms and strut around the place enforcing, you guessed, the law. This doesn’t mean they’ll be muscling their way into boardrooms or bank headquarters or mafia hideouts, after the real criminals. They just won’t have time. They’ll be too busy hanging round parks and council estates, patrolling the odd bus station in their fabulous outfits, a pot pourri of home-tailored Nazi fantasy gear (cue Prince Henry) with a touch of Tom of Finland for good measure. The cute little symbol at the top of the post is some nonsense that means a great deal to shaven-headed thugs who think they’re the master race and absolutely nothing to the rest of us. But it might be worth memorising it. Because if the person who’s kicking your head in has got one on his bicep, either tattooed or sewn on by his granny, you haven’t got a leg to stand on (ouch!). He’ll be legal.

This entry was posted in fascism, italy. Bookmark the permalink.