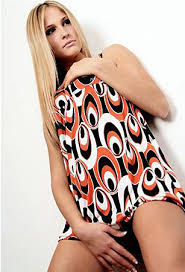 According to the ex-boyfriend of Noemi Letizia, the 18-year-old knicker model and would-be member of parliament who refers to Silvio Berlusconi as her ‘papi‘, Noemi was invited to one of SB’s villas in Sardinia last summer, along with 30 or 40 other teenage girls, to enliven the emperor’s evenings. Noemi and her friend, Claudia, were seventeen, which, in legal terms, is old enough to fuck entertain powerful men and be rewarded for it, albeit with the connivance of the girls’ parents, but it would be interesting to know a little bit more about the male guests at the villa. It’s hard to imagine SB enjoying all those angelic faces without a little masculine solidarity to make him feel like one of the boys. So who kept him company? Politicians? Businessmen? A clutch of accommodating journalists? Cherie Blair says that SB’s jaunty bandana ruined her and Tony’s photo-opportunity – or should that be holiday? – some years ago in the same villa, or another: he has so many. I wonder if she knew about the joy division in the bungalows round the back.

This entry was posted in berlusconi, blair, italy, politics, sex. Bookmark the permalink.