Press freedom in a democracy. Lesson one. 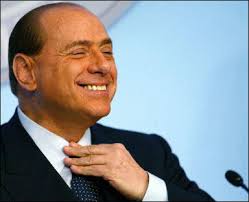 Dario Franceschini, the new PD leader, though probably not for long, suggested  a couple of days ago that the unemployed should receive some kind of indemnity payment from the government. I thought they already did, or at least had the right to do, but apparently I was wrong. There were vaguely positive murmurings from left and right, possibly because it looked like the kind of thing Obama might propose, so it’s a bit of a vote-catcher and it never hurts to be associated with one of those.

But Berlusconi immediately ruled the proposal out. Not because it was unfair, or because the funds weren’t available. His argument, in pure Silvio fashion, was that it would encourage employers to sack people. These people would then pick up their dole cheques and be re-hired illegally at lower wages. What kind of brain does it take to come up with that kind of scenario? (Yes, this question is intended to be rhetorical.)
He also said that Italy is the only democracy in which state television criticises the government in power with impunity. (If only this were true.) He’s obviously been taking lessons in democracy from Putin. Oh yes, his latest word on the economic crisis. He admits there is one, but insists that the media exaggerate it. Which media? Not, one assumes, the huge swathe of it owned or controlled by the grinning buffoon himself.

This entry was posted in berlusconi, freedom of speech, italy. Bookmark the permalink.

2 Responses to Press freedom in a democracy. Lesson one.