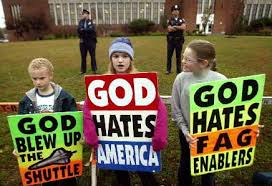 I’ve heard people say that the Westboro Baptist Church, by revealing the true face of fundamentalist homophobia, is the best thing to happen to the fight for gay equality in years. I suppose this is true in the same way that summary executions of teenage gays in Iran or the anathema of Mugabe and the president of the Gambia, whose name I have no intention of committing to memory, are ‘useful’ reminders of the lengths to which instutionalised homophobia can go. By this token, Ratzinger’s decision to welcome back to the catholic fold a gang of befrocked negationists, otherwise known as the schismatic followers of French archbishop Lefebvre, can also be seen as a good thing as it strips away yet one more layer of whatever moral

authority the man, and the organisation he represents, is supposed to possess, though it must be rather hard on those catholics who belong to the church because they believe in the message of Christ. The next thing you know he’ll be recognising the authenticity of the Protocols of Zion. Why shouldn’t he? Holocaust-denier archbishop Robert Williamson already does.

This entry was posted in holocaust, homophobia, ratzinger. Bookmark the permalink.