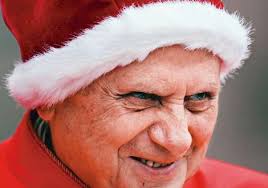 Ratzinger’s festive message was unusually spirited this year. It’s good to know that old age and too many tennis lessons with the lovely Georg haven’t robbed the old trooper of his sense of humour. In a costume that Widow Twanky would have murdered for – and one can only imagine the sumptuousness of the under-garments – Eggs tried out a new routine to the joy of the usual fanbase of lick-spittles and Italian politicians worshipping catholics. Well, not exactly new, more a reworking of old material, but hey! a girl can’t go on dancing all the time. The new wheeze is that the world’s ecology is damaged less by deforestation than it is by pussy-bumping and its male equivalent. (I’d use Madame Arcati’s more colourful terms for this but my mother’s only feet away from me as I write.) According to the mad old slapper, gay sex is the equivalent of wiping out whole tracts of the Amazon. What he hasn’t provided us with, alas, is a conversion table. For example, just how much damage does one act of consensual anal sex do in carbon footprint terms? Come on, Ratzy, we need to know. I mean, if it can be proven that a quick blow job is no more destructive than, say, uprooting a small fruit-bearing bush, at least we know where we stand. We can make a reasoned decision. Maybe we can offset the carbon cost of a weekend on Ibiza, or Lesbos, by planting a hedge of privet and growing some rhubarb. You must have people who know these things, Ratzy. You seem to be surrounded by experts on just about everything, from medicine for the terminally ill, indeed totally vegetative, to the price of bloody fish.

This entry was posted in homophobia, ratzinger. Bookmark the permalink.