…actually, one and a half days in London, but they followed the same rough pattern as the two days I spent there last autumn and I’m just so self-referential I couldn’t pass this one up. You can find out what I did last year by clicking here.

This time I went back to London for the launch of the very wonderful Katy Evans-Bush‘s collection of poetry, Me and the Dead. It was a spur of the moment decision, egged on by Ryanair’s extremely cavalier attitude to global warming and my own desire to be surrounded by poets for an hour or so. Believe me, dear reader, I didn’t regret it. (Well, perhaps momentarily, when Ryanair provided synthetic UHT cream for my cardboard bucket of already undrinkable tea and an eye-rolling Polish steward had no idea what sandwiches were available and seemed to regard this as my problem. But hey! 80 Euros…)

Before the launch and after a late lunch with my sister in the Mess – an excellent café in Amhurst Road; I recommend it – I met up with Isobel Dixon (friend, agent, poet) in a smart and colourful place at the back of the BFI called Benugo’s, where we were joined by Henrietta Rose-Innes, who’d won the £10,000 Caine prize for the best short story in English by an African writer the evening before. (You can read the prize-winning story here.) We celebrated with reviving glasses of champagne before heading off to the Royal Festival Hall for a look-in at the London Literary Festival barbecue, where I almost met Rachel Holmes, head of literature at the South Bank Centre, and had some extremely drinkable white wine. This had the advantage over Pimm’s of being immediately available rather than a reward for reaching the head of a shortish queue. After which, we moved on, without Henrietta but with Julia Bird, to Katy’s launch in Covent Garden.

I had a great time. Katy read two poems, with great elegance and authority, from a chair in the corner of the over-crowded downstairs room of Treadwell’s, leaving us wanting more – the only way to be left, in poetry as in much else. I finally met a whole bunch of people I’d previously known only as fellow-bloggers or web acquaintances of one kind or another – Elizabeth Baines, Simon Barraclough, Anne Berkeley, and wasn’t disappointed. I also had the very great pleasure of seeing John Wilkinson again after more than twenty years. And the wine didn’t run out. I’d planned to start reading the book on the 38 as it wound its towards Hackney, but found myself listening to a conversation between a disorderly drunk and a young artist from Liverpool, possibly about god, in which each vied with the other to see how many times they could address the other as man and still maintain something recognisable as argument. Sadly, the number was lower than either of them fully realised.

Wednesday, as those of you who were in London will know, was cold and wet. I had medical reasons, despite this, for wearing shorts (you don’t want to know), although desert boots were, on the whole, an unwise choice, as was my using an umbrella that protected more or less the same amount of me as a wide-brimmed hat. Still, a grand day out it was, as my sister and I moved off once more to the South Bank to see the Cy Twombly show at Tate Modern.

I wouldn’t have missed it for anything, though Twombly’s final ‘status’ remains for me as much a mystery as ever. By which I mean that I’ve never been more impressed by an artist with fewer painterly virtues, and then less impressed by an artist whose painterly ambitions are clearly enormous. The first Dubuffet-influenced stuff struck me as great, perhaps because I worship the ground Dubuffet walked on, while the earlier graffiti works seemed aimless and the sequence produced at Sperlonga – ten miles from where I live – looked vacuous and muddy: I didn’t get the ‘symbolic whiteness’ business mentioned in the pamphlet at all. The darker crusty stuff in the next two rooms was arresting, with its throbbing dicks and scatological references – I found myself wondering if he’d known Pasolini -, but the Bolsena series, ostensibly influenced by Apollo 11, didn’t work at all. I felt that Twombly liked the idea of science, but not the effort 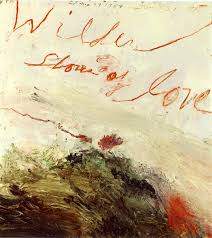 involved in doing it. There was the sense of a pastiche of genuine cultural activity, when what he was doing was, basically, winging it by faffing around with formulae that were merely artistic. This carried on into, and informed, the Muybridge stuuff in the next room. My sense is that other artists have done fake science much better than Twombly, although my sister liked these two sequential works very much. She didn’t much like the tributes to Nini Pirandello, on the other hand, which I thought wonderful: restrained, elegiac, hard-won. We agreed though on most of the final work. I remember one critic talking about the falling-off in Twombly’s ouput, but what impressed us most was the sheer energy of the later work. There was a footling quality about the Roman stuff done in the 60s, despite the down-and-dirty aspirations it clearly had. But Hero and Leandro and The Wilder Shores of Love, particularly the former, were grandly ambitious and achieved works by someone who has suddenly become a great colourist, something that’s evident in the Venice series and even more so in the two Four Seasons sequences. The large, brash Bacchus paintings in the final room, where the difference between blood and wine, revelry and madness, is obliterated by the swooping, harrowing scrawl of red, are a great way to end the show.