I don’t live in Rome any more and many of the years I did spend in the city it was ruled by a series of insipid Christian Democrats, their names forgotten, more interested in nest-feathering than the fate of Caput Mundi. The place felt much as it must have done when sheep grazed in the Colosseum and the barbarians were a distant, fond memory. Since then, it’s been put on its feet by two centre-left mayors: Francesco Rutelli and Walter Veltroni. The centre’s been transformed in the past fifteen years, not always for the better. Some of the most characteristic parts of the city – such as Campo de’ Fiori – have been sacrificed in the name of health and safety. Public transport could still be improved, though it remains notably cleaner, faster and cheaper than that in London. (Not, I repeat, not than that in Paris.) It’s a far pleasanter place to be than Milan, ex-capital in all but name and gone to the dogs in the past twenty years. It’s been shown to be one of the safest cities in Europe and, I think, the safest capital. 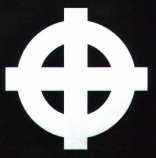 So what went wrong? Why did Rome turn its back on Rutelli and elect neo-fascist Gianni Alemanno, an ex-squadrista with a list of arrests for political violence as long as your arm, proud bearer of the Celtic cross (see left), a minister in Berlusconi ‘s last government, the son-in-law of Pino Rauti, suspected train bomber and founder of Ordine Nuovo? I don’t know, and if you want an answer you’ll find a lot of finer and more informed political brains than mine only too happy to provide one. I don’t know, but. But.

I’d blame a lot of the defeat on the decision to re-propose Francesco Rutelli. The first time round, he was young, innovative, attractive in a rather square-jawed knitting-pattern way. He still had the air of resistance to the institutions that he’d acquired as blue-eyed protégé to Marco Panella. Since then, he’s lost an election to Berlusconi, he’s shifted from a secular and radical position on civil issues to the kind of half-witted bigotry you get from ‘teodems’ like Paola Binetti. He’s become a mouthpiece for the most blinkered and conservative elements in Italian society. Who needs him? I have nothing but admiration for all those Romans who held their noses while putting a cross beside the man’s name, but it can’t have been easy. Next to Rutelli, even Gianni Alemanno might look like a new broom. Albeit one in the sweeping hands of Berlusconi, Bossi and the Vatican (whose current CEO also has a rather murky fascist past).

If Veltroni wanted the PD to look like a paradigm shift in Italian politics he couldn’t have picked a worse candidate than the mealy-mouthed institutionalised has-been he chose. It was a lazy decision, and a contemptuous one. And now both Rome and the entire country will have to live with the consequences.