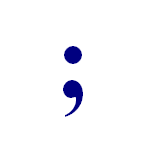 Each culture gets the windbag it deserves. Italy has Pietro Citati, a man who imagines that, by writing about Kafka, Goethe, Proust, et al, he’s somehow earning his own place in the pantheon. What Citati doesn’t seem to have realised is that the weight of the flea and the weight of the dog aren’t just different, but on different scales.

He’s now turned his vacuous critical eye on an issue which doesn’t really concern him at all, except in a snobbish high-cultural way: the use of the semi-colon in English. I was in England when the poor thing’s imminent demise was announced in France, so I had the chance to read all the comments in the press. Apart from a woman who seemed to think that punctuation included just about everything, from grammar to register (I can’t remember who she was, or where she wrote; perhaps you can), most people were fairly sensible about the business, whether they cared or not (I’m a semi-colon fan, as you may have noticed). The general mood was that the world, and language, and literature, will survive. Interestingly, very few people seemed to know exactly what grammatical role it played; the general feeling was that it marked a longer pause than a comma, a shorter one than a full stop. It was actually fascinating to see how many writers see punctuation less as semantic than as a sort of musical notation. A mark of breath.

Citati, though, cares. He really cares. He says that the murder (sic) of the semi-colon is worse, far worse, than the murders we read about each day in our daily papers: the murders of husbands and wives, daughters and sons, cousins and great-aunts, second cousins and step-brothers, nephews twice removed and great-great uncles on the mother’s side (Citati loves accumulation; the longer the sentence, the easier it is to pop in a couple of semi-colons). People are nothing compared to that sexy combination of full stop, round, circular, plump, spherical (Citati loves synonyms) perched, hovering, poised, above the comma, caesura, curvaceous whatsit, er, punctuation mark. Who needs people? People aren’t culture.

He then has a go at academic language in Britain today. He doesn’t give any examples – why interrupt the flow? He simply complains that most sentences in Anglo-Saxon discourse these days are based on the three word structure of subject-verb-object. It would actually be quite hard to construct an argument on this basis, given that most English sentences also contain at least one article and an auxiliary verb, which would push the word count up to five or six. But what the hell. Citati isn’t just an artist; he’s a humanist. Even better, he’s an Italian humanist. He doesn’t need precision. It just has to feel good. It just has to make him look good.

He goes on to praise the Italian of today, by which he appears to mean his own, for its dignità, autorità and solennità, as if these qualities were somehow more valuable than precision or, horror of horrors, invisibility, by which I mean a language that doesn’t parade its finery or draw attention to itself. The problem with dignity, and authority, and solemnity is that they’re the kind of qualities that popes and warlords and emperors base their power on, not writers. Writers shouldn’t have, and shouldn’t need, new clothes. Citati should check his wardrobe, before it’s too late.

This entry was posted in citati, language, semi-colon. Bookmark the permalink.