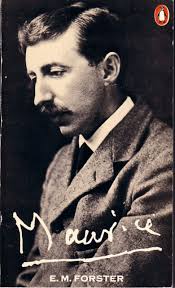 In his Terminal note to Maurice, EM Forster writes that the novel was the direct result of a visit in 1913 to the ‘socialist and Whitmannic poet’ Edward Carpenter at Millthorpe. Forster comments:

It must have been on my second or third visit to the shrine that the spark was kindled and he and his comrade George Merrill combined to make a profound impression on me and to touch a creative spring. George Merrill also touched my backside – gently and just above the buttocks. I believe he touched most people’s. The sensation was unusual and I still remember it, as I remember the position of a long vanished tooth. It was as much psychological as physical. It seemed to go straight through the small of my back into my ideas, without involving my thoughts. If it really did this, it would have acted in strict accordance with carpenter’s yogified mysticism, and would prove that at that precise moment I had conceived.

I was reminded of this scene when I met the author of Akenfield, Ronald Blythe, in Aldeburgh. I’d learnt earlier that day that he used to come to Aldeburgh to shop with Forster so my first thought was something along the lines of diachronic degrees of separation. Only four between me and Whitman, I calculated, and this is where my memory or myth-making tendencies – what my mother called ‘romancing’ – played me false. Because I was convinced, first, that it was Carpenter himself, not Merrill, who’d laid hands on Morgan’s backside and, second, that Carpenter had been blessed in similar fashion by Walt Whitman. At which point. Morgan’s creative stroking of Blythe’s bum was a foregone conclusion and all that was missing was Blythe’s own fair hand on my own fair small of back. I wouldn’t say I took the position, in the manner of a beta male orang-utan, though I do admit to a momentary flirt with the Suffolk historian and baton-holder, in my eyes, in the greatest race. Well, my bum went unrewarded, but I did get a warm palm pressed against mine and a whispered, Thank you, my darling boy. It will do.

This entry was posted in em forster, gay. Bookmark the permalink.