Posted on September 12, 2007 by Charles Lambert

This summer, I saw a painting I’d never seen before, in the Centre Pompidou. Entitled Peinture (Ecriture rose) and covering a fair-sized chunk of wall (maybe three metres by four), it’s the work of Simon Hantai and was done in 1958-59, which makes it almost half a century old. It’s remarkable for a number of reasons, none of which can be deduced from the very poor photograph of part of it that you can see above, perhaps the most obvious being the fact that the colour pink, despite the work’s title, isn’t used at any point (as Helene Cixous has pointed out). The symbols on the canvas are references to earlier works but the body of the painting, its essential surface, is composed of writing. Hantai spent a year on the picture, working each morning to cover the entire canvas with meticulously copied extracts from philosophical and religious texts. The effect, of course, is to annihilate their meaning, but it’s also a monument to the word as object in the same way that anything produced by a pre-Gutenberg copyist might be considered to be.

Two or three days later we were in the Arab Institute near Notre Dame, an extraordinary building containing a small but fine collection. Among the exhibits was an eighteenth century Iranian copy of the Koran, inscribed on a roll with the same kind of maniacal devotion as Hantai’s, and, whatever its intentions may have been – and they were surely diametrically opposed to those of Hantai – the final effect is remarkably similar. In both cases, the actual sense of the word is subsumed in the representation of it as sign. The purpose of this Koran must have been to make the holy word available to its readers, but the manner of its transmittal renders it useless other than as totem. It disappears into the paradoxical beauty of the work as completely as Hantai’s religious and philosophical texts, written in what appears to be a variety of coloured inks – red, blue, green, but never pink. 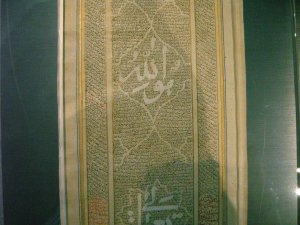 This entry was posted in art, islam, paris. Bookmark the permalink.