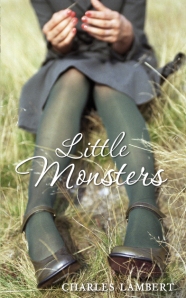 If you’d like to pre-order your copy of Little Monsters from Amazon (a mere six months before the publication date), you can do so by clicking here. If, on the other hand, you’d simply like to admire the jacket image, here it is.

And here’s the synopsis:

When I was thirteen my father killed my mother.

How do you recover from something like that? Carol never quite does. She’s sent to live with her aunt, who barely tolerates her presence, much less makes her welcome. Grief-stricken, and all too aware she’s not wanted, Carol is prickly and awkward. Desperate for love, but unable to ask for it, she nonetheless – and almost despite herself – finds it, perhaps where she least expected: her Uncle Joey is the only one to notice her when she’s a teenager; years later, when she knows him as Jozef and he’s sacrificed more for her than she can really comprehend, he’s also the man with whom she builds a home and a life. But when Carol helps to rescue a young refugee from the sea, that life suddenly threatens to unravel, just as surely as it did when she was thirteen. Written in tight, spare prose, “Little Monsters” is a novel of creation, redemption and obsession; it’s also the story of what it’s like to experience the unthinkable – and what happens next.